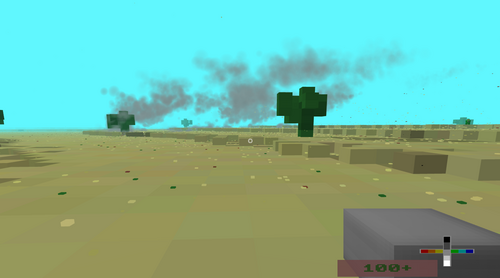 1. Scopes and Gameplay mechanics change: Previously, Voxelwar used to rotate the camera when moving while aiming down - now this has completely changed; since the new release, the gun moves aroun while aiming, which is a much better gameplay mechanic. Moreover, since it will return on its position on its own, you can crouch or move slowly while scoping and still keep some object in your crosshair!

3. Several changes were done to the settings menu, which can be used with the mouse and arrow keys now. An important settings, the performance profile, has been introduced, which allows the player to set minimum or maximum graphics settings quickly.

4. Better debugging and displaying of error messages, in general the engine is a bit more "robust" now in these terms

5. Escape button now requires holding it down for some time instead of instantly closing the game (for the noobs)

6. When failing to setup sound, the engine will now try different settings, which may enable sound even if the configuration is wrong

8. Added basic rain and weather, which greatly improves the ambience in the desert map. I also added a little of rain to classicgen

9. Fixed some bugs related to the map boundaries

10. After some testing, I consider Voxlap not to be stable enough at high resolutions - it crashes/freezes at least 60% of times and is almost guaranteed to crash/freeze if resizing from the standard 800x600 to very high resolutions, therefore I limited the maximum resolution in Voxlap mode to 1280x720 (adjusts itself to your aspect ratio). Since Voxlap is pixelated on its own already and it will scale to the screen, it won't be noticeable anyways.

12. Added gradiented sprite shading in a style similar to Voxlap and to what the original AoS developer had in mind